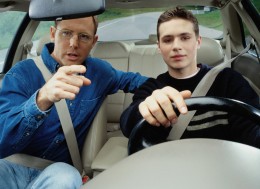 Seventy-five percent of accidents involve a “critical error” in judgment , not as commonly thought, “aggressive driving.”

Teen drivers are four times more likely to be involved in a fatal car crash than an adult, found a study by The Children’s Hospital of Philadelphia and State Farm Insurance Companies. Parents can do several things to help keep their teenagers safe behind the wheel. Here are a few teen driver safety tips:

Two other effective, though more costly, things you can do are:

It is important for you — and your son or daughter — to remember that, yes, your auto insurance rates will go up, but they will come down after he or she gains a couple years of driving experience. However, your rates will really go up if your teenager has tickets or gets into accidents.