Drugs are formulated for normal physiology. Physicians with knowledge of a person’s unique genetic makeup can better determine which drugs will be most effective.

Anyone who has watched a commercial for a prescription medication expects to hear a disclaimer warning of potential health hazards. Possible side effects — depending on the medication — can range from constipation to death! 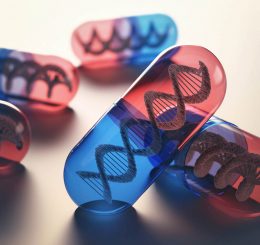 Another side effect of many pioneering pharmaceutical drugs is that they are outrageously expensive and one of the primary causes of rising health care insurance costs.

Pharmacogenomics may be the answer.

Pharmacogenomics is the study of how a patient’s genetic makeup can affect the drugs they take for an illness. In particular, pharmacogenomics studies how human genes can influence various responses to drugs. Drugs are formulated for normal physiology, but a patient with a vastly different genetic makeup could be at risk of drug toxicity or could experience sub-therapeutic effects. For instance, a drug that works slowly for one individual might metabolize more quickly for another and leave the body too soon to be effective.

Physicians armed with knowledge of a person’s genetic makeup can predict if an individual is at risk for a particular disease and make more informed decisions about which drugs will be most effective. Physicians can also learn which dosage will best achieve the desired results.

Equally important, it may be revealed through genetic testing that the discomfort some individuals experience is actually caused by the drug they are taking — a situation that can easily be remedied.

Currently, pharmacogenomics testing focuses on evaluating 200 to 300 drugs used for cardiac problems, pain, cancer, psychiatric issues and brain and infectious diseases. Because the cost of developing a new drug is around $1 billion, the cost of testing exactly how a drug affects people individually — which is getting lower all the time — is a good investment for everyone involved. Drug prescriptions will be far more accurate and pharmaceutical companies will face less risk and incur lower costs developing and marketing new medications.

Your health plan may cover the cost of genetic testing when recommended by a doctor. Many people who have participated in genetic testing have discovered that they need fewer drugs. Employees get better health care because their medications work more effectively, while employers typically pay lower premiums because of reduced costs. Please contact us for more information.

While pharmacogenomics can be used to provide personalized information about which drug will be most effective for particular individuals, there could be ethical implications.

Privacy and confidentiality in genetic testing is a major concern. If testers discover that the results are critical to family members’ health — such as an inherited risk factor — the question arises, should this information be shared with others who have a direct interest? Should such information be given to employers or insurance providers even if the patient doesn’t want it shared? Especially when the information could be critical in deciding to provide insurance coverage or evaluating a job promotion?