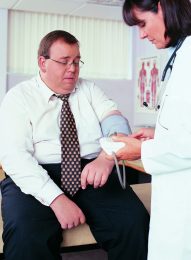 Generally, employers can use employment criteria that would otherwise be discriminatory if they are bona fide occupational qualifications (BFOQs).

The majority of American adults are overweight or obese, yet studies have found that weight discrimination is increasing. One recent study found it was as prevalent as racial discrimination.
The study mentioned above used a subjective measure, individuals’ perceptions of being discriminated against for their weight. But studies using more concrete measures, such as pay and position, have found evidence of weight discrimination as well. A 2010 study led by Timothy A. Judge of the University of Florida found a strong pay bias in favor of thinness in women. Women who weighed 25 pounds less than the norm for their group earned an average of $15,572 more per year. Those who weighed 25 pounds more than the norm earned $13,847 less than average.

Another study, “Weight Discrimination and the Glass Ceiling Effect Among Top U.S. CEOs,” found that weight had a glass ceiling effect for women. Using photographs of CEOs of Fortune-ranked companies, researchers estimated that overweight and obese women were significantly underrepresented in the group, with approximately 22 percent overweight and 5 percent obese.

The study found that being overweight did not have the same impact on career advancement for men. “Compared to the general population, overweight men are overrepresented among top CEOs [emphasis added]…” However, as with women, obese men were underrepresented at 5 percent of the CEO group. The authors concluded that “weight discrimination occurs at the highest levels of career advancement and…the threshold for weight discrimination is lower for women than for men.”

Some individuals have used the Americans with Disabilities Act (ADA) in weight discrimination claims. However, barring an underlying physiological disorder, being overweight or obese generally does not qualify as an ADA-protected disability. The U.S. Equal Employment Opportunity Commission (EEOC) says:

Being overweight, in and of itself, generally is not an impairment…[if weight] is “within ‘normal’ range and not the result of a physiological disorder”…. Thus, for example, a flight attendant who, because of avid body building (which resulted in a low percentage of body fat and a high percentage of muscle), exceeds the airline’s weight guidelines does not have an impairment…Similarly, a mildly overweight flight attendant who has not been clinically diagnosed as having any medical anomaly does not have an impairment….

The Americans with Disability Act Amendments Act of 2008 (ADAAA) broadened the ADA’s definition of disability to cover individuals who are perceived to have a disability, even though they do not. Many experts thought that this would open the door to more weight discrimination cases. However, EEOC regulations implementing the ADAAA say:

Therefore, overweight or obesity does not put an individual into a protected class, unless the condition has resulted in a substantial limitation of a major life activity.

Generally, employers can use employment criteria that would otherwise be discriminatory if they are bona fide occupational qualifications (BFOQs). To determine whether a personal characteristic is a BFOQ, ask yourself if an individual really needs it to perform the essential functions of the job. With jobs that require a certain level of physical fitness or use of certain equipment, you are safer asking an applicant to demonstrate his/her ability to perform that job function than to impose specific height or weight requirements.

What about the personal appearance of employees in the public eye? Can you discriminate in favor of slim employees, since most people find them more attractive? Employers can legitimately require employees to meet certain standards of grooming and dress, but requiring them to be a certain size could lead to charges of discrimination. Regardless of the current state of the law, in today’s diversity-conscious society, wise employers avoid weeding out qualified individuals on the basis of weight, or any other personal characteristic.