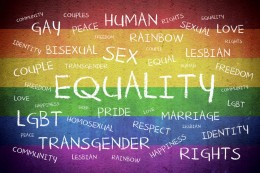 
No federal law expressly bars discrimination against people for their sexual orientation. In 2012, however, the EEOC’s Strategic Enforcement Plan (SEP), adopted by a bipartisan vote, lists “coverage of lesbian, gay, bisexual and transgender individuals under Title VII’s sex discrimination provisions, as they may apply” as an enforcement priority for Fiscal Years 2013-2016. Since then, the agency has begun to file LGBT-related lawsuits under Title VII challenging alleged sex discrimination.

Earlier this year, in a claim filed by an unnamed homosexual man against the Federal Aviation Administration, the EEOC interpreted Title VII of the Civil Rights Act of 1964 to apply to lesbian, gay, bisexual and transgender people. The complainant had worked as an air traffic control specialist. He alleged he was not considered for a promotion because of his sexual orientation, and provided examples of disparaging comments his supervisor had made in his claim to the EEOC.

Title VII of the Civil Rights Act of 1964 states:

It shall be an unlawful employment practice for an employer –

[T]he question is not whether sexual orientation is explicitly listed in Title VII as a prohibited basis for employment actions. It is not. Rather, the question…[is]…whether the …[employer]…has “relied on sex-based considerations” or “take[n] gender into account” when taking the challenged employment action.

Federal laws prohibiting discrimination based on race, color, sex, religion, national origin, age, disability and genetic information, as well as retaliation for protected activity, apply to most employers with at least 15 employees (20 employees in age discrimination cases). Most labor unions and employment agencies are also covered. The laws apply to all types of work situations, including hiring, firing, promotions, harassment, training, wages and benefits.

The EEOC, which has responsibility for enforcing these laws, has become more aggressive in filing LGBT-related lawsuits under Title VII. To avoid charges of sex discrimination, an employer must avoid discriminating against employees or applicants because they do not conform to traditional gender stereotypes. For example, it is illegal for an employer to deny employment opportunities or permit harassment because:

Federal nondiscrimination law aims to put victims of discrimination in the same position (or nearly the same) that they would have been in if the discrimination had never occurred. Types of relief can include:

How much a sex discrimination case can cost you depends on the size of your organization.

To avoid claims of sexual orientation discrimination, employers should examine their hiring practices, employment policies and manuals, benefits packages and benefits statements for any discriminatory practices or wording. Training managers and supervisors to be sensitive to matters of sex discrimination can also help.