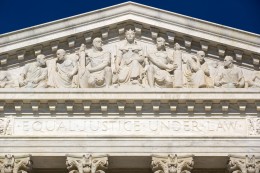 Had King gone the other way, it would have eliminated subsidies in those 34 states.

In late June, the Supreme Court issued its decision in King v. Burwell. The case challenged the legality of subsidies in federally run or federally facilitated health insurance exchanges. The Court ruled the subsidies could stand, a decision that probably saved the exchanges in 34 states from a “death spiral.”

The plaintiffs questioned the legality of the healthcare subsidies created by the Affordable Care Act in states that have an exchange run by or facilitated by the federal government. Had the ruling gone the other way, it would have eliminated subsidies in those 34 states.

The Affordable Care Act makes subsidies available to people who buy health plans on an “Exchange established by the State.” Based on those five words, the plaintiffs in King v. Burwell challenged the legality of subsidies in states without a state-established insurance exchange. The Act makes no provision for subsidies in federally established exchanges. Only 13 states and the District of Columbia have state-established insurance exchanges. The others have either a federally supported state-based program, a transitional partnership program or a federally facilitated marketplace.

If the Supreme Court had ruled in favor of the plaintiffs, the ruling would have eliminated subsidies in states where the federal government is involved in the marketplaces.

According to the Kaiser Family Foundation, “People receiving subsidies make up 87% of those who have signed up for coverage for 2015 in states using the federal marketplace.” If the Supreme Court had ruled against subsidies in federal exchanges, costs would have gone up dramatically for people who buy their coverage in them. Many would likely drop their coverage.

Now that the King decision is settled, health insurers can now more effectively price their policies for 2016. If you find health insurance confusing, we can help you at no additional cost—even if you buy your coverage through the health insurance exchange.