Many homeowners don’t. The Insurance Information Institute surveyed homeowners to find out how well people understand their policies. Here are some of the findings of the III’s 2016 Consumer Insurance Survey.

Does homeowners insurance include flood coverage? 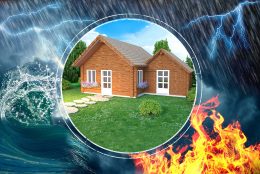 importance of buying flood insurance in 2016 than in 2010, when only 10 percent of homeowners purchased the coverage.

Does homeowners insurance include earthquake coverage?

On average the survey also found that 29 percent of homeowners incorrectly think standard homeowners policies provide coverage for earthquake damage, including earth movement from sinkholes (31%), mudslides (24%) and landslides (23%). Though seismic activity is perceived to be more prevalent in the West, earthquake activity has increased in other parts of the U.S. in recent years. Oklahoma’s largest earthquake in modern times, at magnitude 5.8, occurred on September 3, 2016. As in the Oklahoma instance, underground wastewater disposal associated with oil and natural gas production is causing increased seismic activity in many places, according the U.S. Geological Survey.

What does homeowners’ insurance cover that you might not be aware of?

The point is homeowner policies cover personal belongings stored off premises, though sometimes an insurer will limit the amount to 10% of the personal property limit.

Another homeowner coverage many people are not aware of is damage from things falling from the sky.

Many people also have incorrect notions of what the liability portion of their homeowner policies covers:

Finally, almost half (48%) of homeowners don’t know that their policy provides additional living expense coverage (ALE) for special living costs you incur when you can’t live in your house because of an insured loss. ALE includes costs for temporary housing, hotel bills, restaurant meals and more.