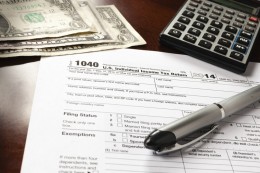 To date approximately 7.5 million taxpayers have reported having to pay the “shared responsibility” penalty payments, which averaged around $200.

According to the Internal Revenue Service, almost 7.5 million Americans have had to pay a penalty for lacking health insurance in 2014 – and the tax season isn’t over.
As of mid-July, the IRS had processed approximately 135 million of the approximately 150 million individual tax returns it expects for tax year 2014. In 2014, the Affordable Care Act’s “individual responsibility” provisions went into effect, requiring most Americans to have health insurance or pay a penalty.

The IRS reported that the vast majority of taxpayers have qualifying coverage either through the workplace, Medicare or Medicaid.

If you had coverage for yourself and everyone in your household for the entire year of 2014, you or your preparer will check a box on your tax return.

About 76 percent of taxpayers so far have indicated they had coverage. Another approximately 7 million dependents do not have to report coverage, have filed, for a total of 81 percent of returns. More than five million taxpayers, when submitting their tax return, neither checked the box saying that they have health coverage nor claimed an exemption nor paid a penalty. The IRS says it’s currently analyzing these cases to determine their status.

To date approximately 7.5 million taxpayers have reported having to pay the “shared responsibility” penalty payments, which averaged around $200. People who lacked coverage or an exemption in 2014 must pay the higher of these two amounts:

In addition to penalties, the Affordable Care Act offers subsidies for people who buy insurance coverage through state or the federal health insurance exchanges and qualify based on income. Approximately 2.7 million taxpayers claimed subsidies averaging $3,400. Out of this figure, 40 percent claimed less than $2,000, while another 40 percent claimed between $2,000 and $5,000; the remaining 20 percent filed claims for $5,000 or more.

Consumers have a choice of receiving their subsidy as either an advance premium tax credit, which goes directly to the insurance company to pay premiums, or at tax time, as a premium tax credit (PTC). A taxpayer’s APTC is calculated based on expected income, number of family members, and other factors. If taxpayers’ actual circumstances at the end of the year differ from projections, they may have to repay excess APTC or receive net PTC. Taxpayers who had APTC paid on their behalf in 2014 must file a tax return to reconcile the APTC, regardless of whether they would have to file a tax return otherwise. The IRS does not require you to attach documentation or proof of insurance coverage to your tax return, but you should maintain it for your records.

As with most things, the cost of noncompliance will go up. If you lack health insurance for more than a total of three months in 2015 and can afford coverage, you’ll pay the higher of these two amounts: