In mid-November, OSHA published its long-awaited final rule on slips, trips and falls. The rule becomes effective on Jan. 17, 2017, and will affect approximately 112 million workers at seven million worksites. 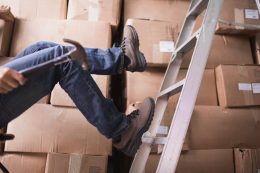 In 2014, falls, slips and trips accounted for 17 percent of all fatal work injuries, second only to transportation accidents. OSHA estimates that, on average, approximately 202,066 serious (lost-workday) injuries and 345 fatalities occur annually among workers directly affected by the final standard. It estimates the new rule will prevent 29 fatalities and more than 5,842 injuries annually.

Many industry experts believe the Trump administration will let the new rule stand, since it is fairly employer-friendly. The rule gives general industry employers greater flexibility in choosing a fall protection system. As much as possible, OSHA aligned fall protection requirements for general industry with those for construction, easing compliance for employers who perform both types of activities.

For example, it eliminates the existing mandate to use guardrails as a primary fall protection method and allows employers to choose from accepted fall protection systems they believe will work best in a particular situation — an approach that has been successful in the construction industry since 1994. In addition, employers will be able to use non-conventional fall protection in certain situations, such as designated areas on low-slope roofs.

Specifics of the Rule

The final rule replaces the outdated general industry scaffold standards with a requirement that employers comply with OSHA’s construction scaffold standards. The rule requires employers to protect workers from fall hazards along unprotected sides or edges that are at least four feet above a lower level. It also sets requirements for fall protection in specific situations, such as hoist areas, runways, areas above dangerous equipment, wall openings, repair pits, stairways, scaffolds, and slaughtering platforms.

Employers can select from a variety of fall protection systems, including:

The key takeaway: Employers must provide additional protection to workers any time they are at a height of six feet or more (construction industry) or four feet or more (general industry) off the ground.