No man is an island, they say. And neither is a business. As Hurricane Sandy and Winter Storm Nemo demonstrated, businesses today are increasingly interdependent. Contingent business interruption insurance can protect you when a covered loss affects a “contingent business location.” 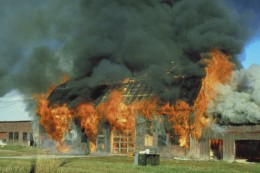 If you lose business because the building next door burned down, contingent business interruption coverage can help.

Most businesses have some business income (also known as “business interruption”) insurance. If you have a business owner policy (BOP), a policy that packages the basic property and liability coverages together, you have basic business income coverage. This coverage reimburses the insured property owner for income lost when your business shuts or slows down due to property damage from an insured cause of loss on your insured premises.

Most policies also contain “civil authority” clause. This will cover you for up to two weeks’ of lost income when a “civil authority prohibits access to the described premises due to direct physical loss of or damage to property, other than the described premises, caused by or resulting from any covered cause of loss.” As an example, if police barred access to your street due to a fire at a neighboring building, your policy would provide coverage.

But, as Hurricane Sandy demonstrated, the economic impact of a disaster can be felt far and wide. What if a fire burns a major supplier’s plant and you can’t obtain parts? Or storm damage causes a shutdown for a major client, forcing you to delay a delivery of goods or services?

Contingent business interruption coverage does not cover you for losses due to:

Contingent business interruption coverage makes most economic sense for a business that: